With just four full days now in NYC, it’s amazing how quickly we have settled in and made the city feel like home. We’ve done lots and seen a huge amount, so it’s starting to feel very familiar already. We made a conscious effort to do ‘non-tourist’ things for the first few days, to make sure we felt like we were living here, rather than just on some kind of city break, With accounts open at Bank of America, membership at the local Yoga studio sorted, getting familiar with the local supermarkets, going to the cinema, jogging in central park and chatting with locals at the Marathon, it feels like we are doing what New Yorkers would do, rather than just heading for the big tourist attractions. No doubt that time will come, but for now life on the Upper East Side is suiting us just nicely.

So… what’s this ‘culture shock’ thing all about?

Wikipedia defines it as:

“an experience a person may have when one moves to a cultural environment which is different from one’s own; it is also the personal disorientation a person may feel when experiencing an unfamiliar way of life due to immigration or a visit to a new country, a move between social environments, or simply transition to another type of life”

The fantastic team at the UK Fulbright commission went to great lengths to explain how culture shock might feel, as part of the pre-departure orientation briefings. So I had been looking out for it. However as mentioned in my previous blog, the reason for coming to NYC, from a research (policing) perspective, was the clear similarity to London. Culturally, that is exactly how it feels too. A couple of my favourite yoga instructors in London are from the US, so it is no surprise to be doing the same routine here in NYC, with an American accent telling me off when I am being lazy.

So what have been the shocks…?

Money: We knew that accommodation was going to be expensive and had prepared accordingly. But the cost of day-to-day domestic essentials is just staggering. Luckily, our AirBnB host left some loo roll for us, so I won’t need to fork out the best part of £1.50 a rolI for a few more days yet! I can only assume that salaries here are such that the cost of living becomes palatable. It is what it is and, fortunately, Time Out has a ‘free stuff to do in New York’ section, which will become useful over the next few months. 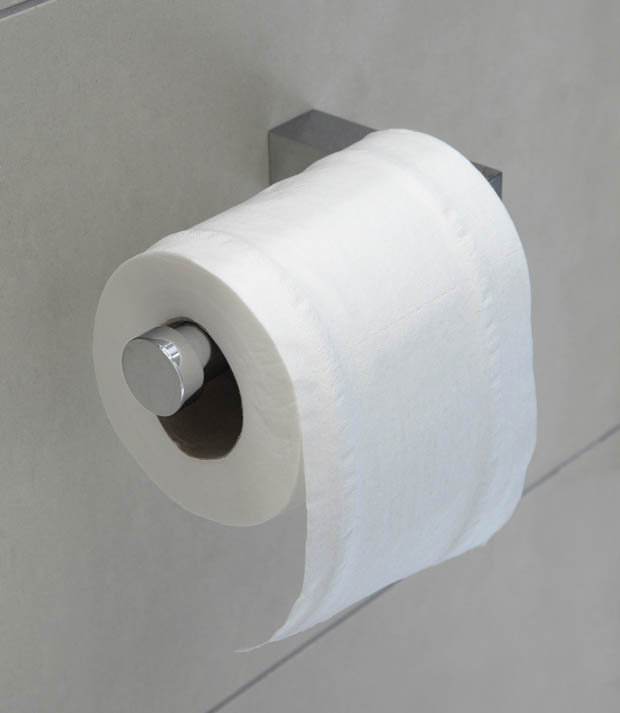 The ‘disorientation’ described in the definition above can be seen in terms of difference (colloquialisms, cost of living) but also in terms of things being more similar than perhaps would be expected. This unexpected similarity can be, of itself, disorientating. The whole premise of the Fulbright programme is to exchange ideas and build bridges between different parts of the world. The recognition of things being so similar to home is a sound basis upon which to build better understanding between the two cities. I expect this to be a common theme that will continue to emerge once I start my research with the NYPD next week.

Communication has perhaps been an area of difference I hadn’t expected. The New Yoik twang feels very familiar, the directness of some of the New Yorkers perhaps a little less so. Public discourse in the UK is frequently constrained by those who seek to find ill intent on the part of the communicator. Because of this, it could be argued that such behaviours give rise to a movement that is often described as the ‘perpetually offended’. In New York, it’s really quite refreshing to hear people saying what they see. In some instances it is also a little unnerving: for example, the shop keeper at our local Bodega (corner shop) observed in a wonderfully strong NYC accent “I like your bald head, it’s funny, I guess at least it makes you waterproof in the rain”. No agenda. No ulterior motive. No ambition to offend. Just a great, honest directness, with a bit of cheeky humour too. It makes communication so much more simple and arguably more effective. I may need to adapt my own style a bit to make life in NYC a little easier to navigate. At the 7/11 last night I asked for some ‘quarters’ for the washing machine (in my best Queen’s English). After attempt number three, with absolute blankness on the face of the cashier, I summoned up my most authentic accent and asked for some ‘quwarders’ instead – and quickly left the shop with the handful of 25 cents coins I needed.

The other observation in terms of this ‘disorientation’ is the role that technology now plays in making international moves so much simpler. Having made use of Google Street View to gauge the feel of the neighbourhood before our arrival, walking the streets felt strangely familiar. The simplicity with which we have been able to video call family back home certainly feels a whole lot easier (and cheaper) than queuing at a phone box to make an expensive international call, as would have been the case as recently as 5 or 10 years ago. The power of Amazon has also allowed us to order the one or two things we just couldn’t fit in the suitcase. The WhatsApp chats with people back in the UK have continued unabated too. Whilst all of this makes the move feel very easy, there is a sense that perhaps the cheap, hand-held technology we now so readily rely on has taken some of the mystique and adventure out of journeys such as this.

So before the real work starts on Monday, the headline conclusion so far is that living in New York is a hundred times better than being here on a city break, we have been made to feel very welcome and, cost of living to one side, all is well.

The really memorable bits so far have included:

The New York Marathon today was fantastic. The city was clearly gearing itself up for it from the moment we arrived. We spotted some folks on the plane who had the look of runners, the bars and cafes are offering reduced price food/drink to competitors and the atmosphere on the day was simply amazing. Having crossed the East River at Queensboro Bridge, the race goes the length of 1stAvenue, from 59th Street up to somewhere in the 120s – we’re on 83rd Street, at about the 17 mile marker, so within two minutes of the apartment were able to be on the course cheering on the runners. 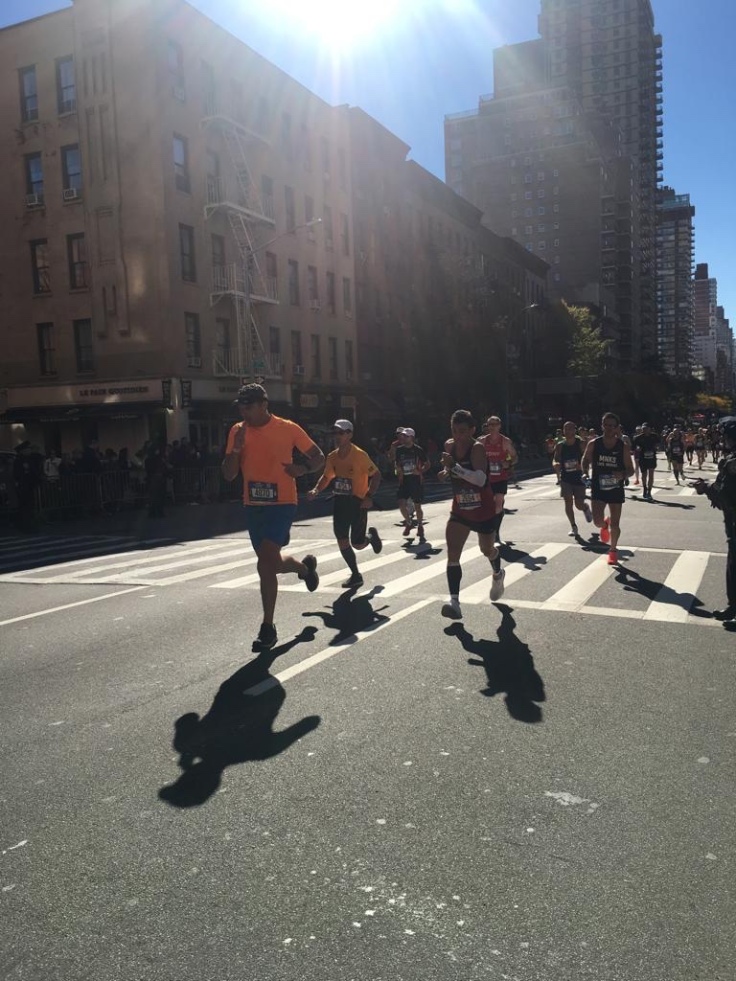 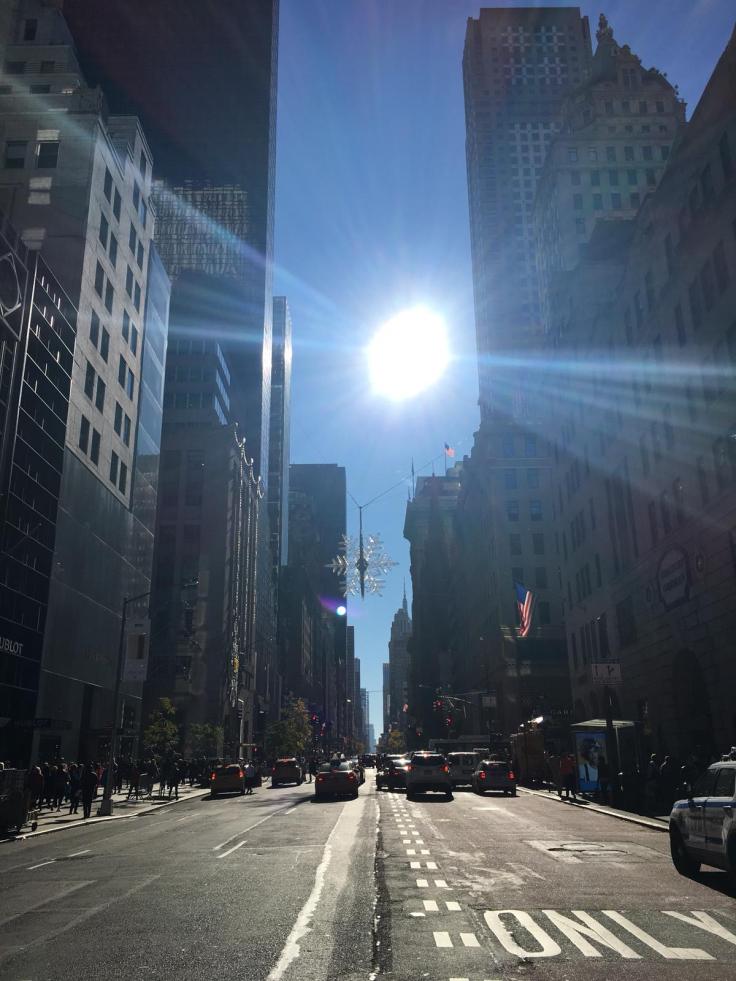 It felt strangely normal to observe the NYPD cops on their fixed points, going about their business in a way that I have done countless times before. Largely enjoying themselves but no doubt slightly frustrated at the repeated nature of the questions coming from the crowd. Cops are only human, after all. The group of six officers who were on 83rd Street j/w 1st Avenue were certainly super professional all day and had that familiar look of relief at the end of their shift when, on my way out to the shop, they were swiftly making their way back to base. I know exactly how good that feels after 12hrs+ on your feet! I found myself watching these officers for a good couple of hours or so this morning, pondering the cultural differences I was seeing when compared to how we would police this kind of event in London. I think I saw similar kinds of conversation with the crowd but perhaps in a more relaxed fashion. The deference shown to the officers from the spectators was also noticeable. Officers were frequently addressed as ‘Sir’ when being spoken to by the locals. Whilst I recognise that this is common language here, its delivery was clearly born out of a respect for the NYPD folks and the job that they do. This will be something I’ll be able to consider in more detail over the next few months.

Central Park looks simply superb. The autumnal (aka fall) colours are just starting to change. The unseasonably good weather has probably done us a favour in that plenty of the leaves are still on the trees rather than on the ground – so the park is absolutely full of colour. It was an admirable setting for the finish line of the Marathon today. The security operation was clearly in full swing, no doubt the legacy of the Boston Marathon terrorist attack has altered the way in which this event is now policed. 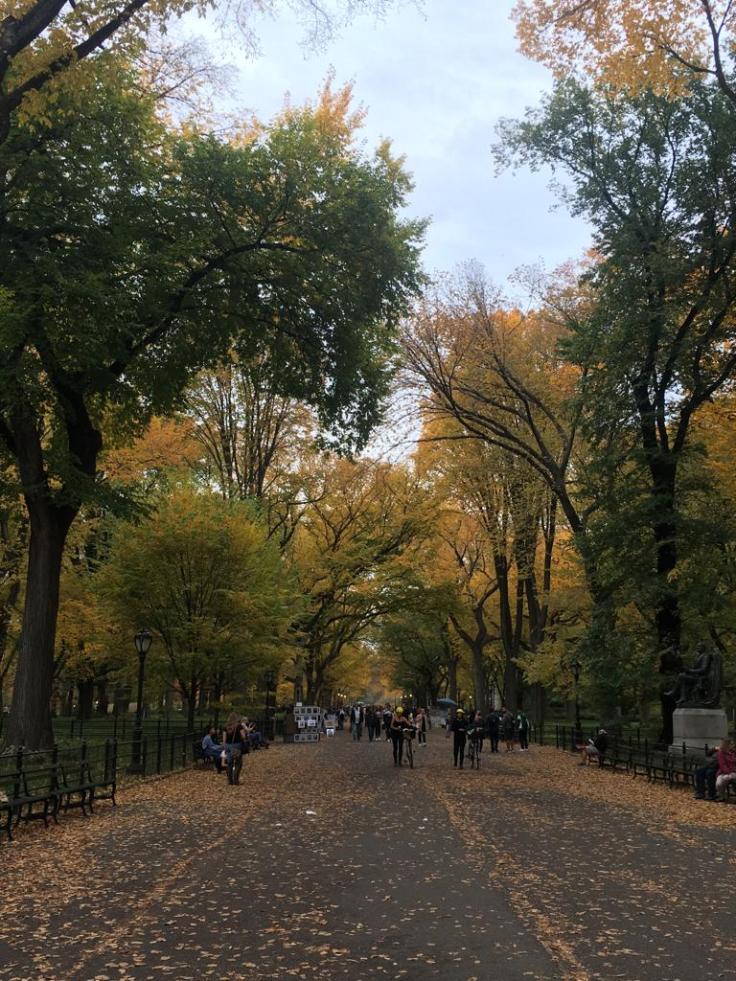 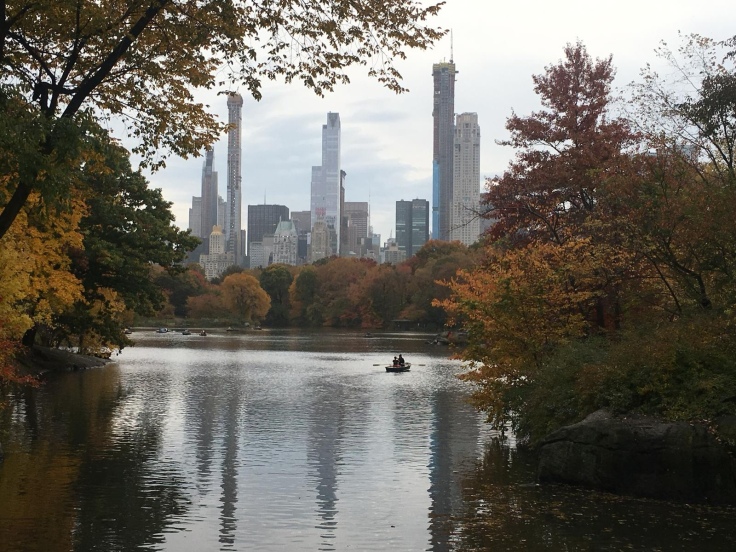 If you haven’t yet been to see Bohemian Rhapsody at the cinema, it’s brilliant – all the more so here in the Big Apple with the New Yorkers whooping and clapping at the good bits. The two Brits sitting at the back could be seen looking awkward and internalising any sense of enjoyment as soon as a smile dared to appear in appreciation of the music. Note to oneself: remain stoically British at all costs and don’t show an inkling of emotion in public.

From a training perspective, I am absolutely spoilt for choice here on the UES. Whilst no doubt I will miss my bike over the next few months, there is no excuse for getting unfit in a city where there is a gym or boutique studio of some description on every corner. Having a yoga studio just three blocks from the apartment is brilliant. The High Intensity Interval Training in 40 degrees is simply horrible, and therefore amazing. Being just 5 mins from my front door it is so much easier than cycling for 30 mins through the west London traffic to get to Fulham.

Next week looks pretty busy, I am meeting with the faculty team at John Jay on Monday morning and my sponsoring professor on Monday afternoon. Tuesday will see my first formal meeting with the NYPD and Friday afternoon might well be the highlight of the week, when I am due to spend a couple of hours with one of the NYPD Chiefs of Department. No doubt this will be extremely interesting and a great to start to the primary data collection for my studies.

Until next time…. thanks for reading.