A very busy 3 days in LA has come to end – I’m now back on board an Alaskan Airlines flight to JFK, so thought it was a good time to do some more blogging. After a pretty manic first few weeks in New York, it was a welcome change of scene and a chance to see a bit more of this huge country. A very busy schedule was prepared by the team at the California Police Lab and the University of Chicago Crime Lab. These two organisations exist to undertake research that can be used to inform public policy. In this instance, in relation to policing and crime. There has been a long held ambition between the four major global policing organisations (the Metropolitan Police Service, the NYPD, the LAPD and Chicago PD) to establish a consortium arrangement, to allow for a more formal exchange of ideas and good practice, to deal with the shared crime and safety challenges that these global cities face. This two-day event was an opportunity to bring together some key influencers from each organisation, to build relationships and share some research findings that have emerged from the respective agencies over the past few years. It was a really useful couple of days.

Upon arrival, we had a quick explore around downtown LA on Wednesday evening. Although not warm, it was nice to be able to go out with just a light jacket and leave the hat/scarf/gloves in the hotel. It was immediately clear why LA is so frequently identified as a city where you can’t really walk anywhere. Huge freeways cut through the city, walking is not a great experience. The thing we immediately noticed was the size of the homeless population. Temporary camps on every block made for a very uncomfortable atmosphere. I was later briefed on the numbers… the City of LA has a population of 4m people, with just over 30k homeless. The wider county of LA has a population of 10m people, with a total of 50k homeless (including the 30K in LA City). These are staggering numbers. By way of comparison, London has a population of just under 9m, so more than twice that of LA, but with a homeless population in the region of 4k. In London, the homeless population is very visible on the streets, so imagine what it looks like in LA. The LAPD Chief described this as the humanitarian crisis of his generation – he is right, this is a huge problem. The gap between the rich and the poor in NYC is really visible. It seems even more so in LA. Having been involved in a lot of work to reduce homelessness, particularly when I was working in Westminster, I know just how difficult this task can be. There were days when the London numbers felt completely overwhelming, so I can’t imagine how it must feel in LA.

Thursday morning kicked off at LAPD HQ with a presentation by Deputy Chief Phil Tingirides and Lieutenant Emada Tingirides, a husband and wife duo who have spent the last few years introducing a ‘Community Safety Partnership’ in LA. Initially into the ‘Watts’ neighbourhood and more recently into other districts in LA. Phil provided a really useful history of police/community relations in the City, which explains why a new and innovative approach was needed to try and turn things around.

The 1940s saw a huge growth in the population of LA, particularly by the black and Hispanic communities who were trying to get away from racism in southern states. A very obvious self-segregation of communities began to occur, naturally leading to some distrust and ill-feeling between groups from different ethnic backgrounds. Post WW2, many of the factories in south LA closed, leading to rising unemployment. At this time, corruption in the LAPD was rife. Whilst the 1950s saw a change in approach and improvements in the way policing was conducted in the city, there was still a long way to go. Crucially, the LAPD were morphing into an agency that was protecting the white community from the community they feared – the black community.

In 1965, there were riots in the LA neighbourhood of Watts. This followed a traffic stop by a white officer on a black resident. All hell broke loose and community relations hit a new low. It got to the point where white motorists driving on the Imperial Highway would be stopped, pulled from their cars and beaten. This became the norm. By 1980 (when Phil Tingirides joined the LAPD) he described the city as a ‘blood bath’. Over 1000 homicides took place in the city that year. In a 1983, a new ‘choke hold’ tactic was authorised by the police department. Officers (normally white) would hold suspects (normally black) around the neck until they passed out, before being transported to the City’s custody facility. The idea was that if the prisoner was unconscious, they wouldn’t fight and if they didn’t fight, they wouldn’t get injured by the cops (or worse). An interesting logic! However, the tactic was (not surprisingly) flawed and a number of people ended up seriously injured or dead. In 1992, the Rodney King beating was perhaps the LAPD’s darkest hour and the riots that followed showed that nothing had really changed since the 1960s.

Against this backdrop, it is clear why police/community relations in LA are so incredibly difficult. The Community Safety Partnership has been initiated to try and resolve these issues. A hand-selected group of officers now patrol the Watts community, tenured for a minimum of five years, working every day with local people to gain their trust and work with them to solve community problems. This is classic neighbourhood policing, as was so successfully rolled out in London in 2006. It’s a disappointment that we have gone backwards since, but that’s the inevitable reality of losing so much government funding since the financial shenanigans of 2008. Huge reductions in violent crime have now been achieved in the Watts neighbourhood, but it has been an extremely expensive scheme to run (more than 50 cops dedicated to making it work). In the context of the current knife crime epidemic in London, it is perhaps a useful reminder that a well-funded police force is much better placed to be a successful police force.

Phil and Emada Tingirides are extremely impressive and have been rightly rewarded for their hard work and commitment.

If you’ve got a few minutes, have a watch of these videos:

After this interesting start to the day, we then went to City Hall to meet with the Deputy Mayor for Public Safety. We discussed some of the partnership work that is taking place in LA, including gang interventions and tactics to improve public confidence in the police. It was an opportunity to test if the tactics we are employing in London are similar to that being seen in LA. They are, so I left with a sense of us being well placed, in the context of what our Californian colleagues are doing. 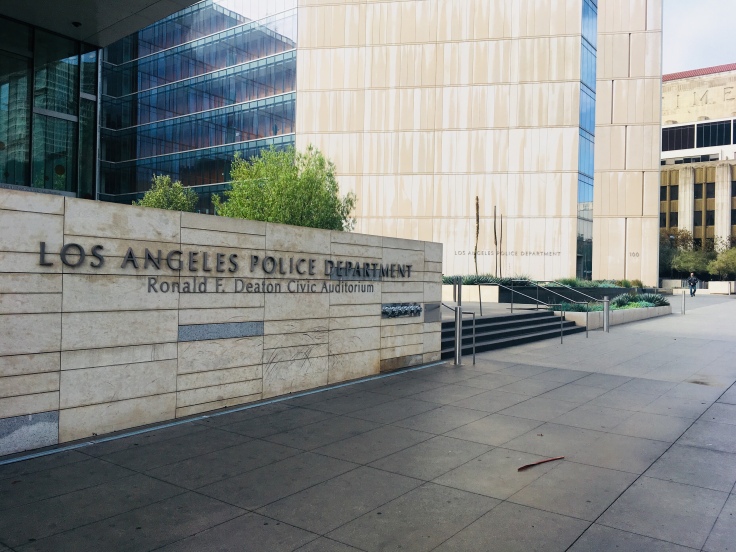 After lunch in a very tasty Indian restaurant with a colleague from the Met and two chaps from the NYPD, we got the reps from the four forces together with a handful of researchers from the two host organisations. We threw around some suggestions about how we can go about getting the four forces research consortium up and running. Lots of good ideas, great new networks established and definitely lots of opportunities to collaborate more on research between New York, London, Chicago and LA.

Dinner was at a very nice French restaurant, with Steak and Chips and a couple of cold beers – very welcome after a long day surrounded by very smart people who had made my brain hurt, lots. I sat with two of the Deputy Chiefs from Chicago, chewing over some of the shared challenges we are grappling with. They are going through a significant recruitment drive at the moment – in the region of 1000 officers have joined the police academy this year. Their police chief, equivalent to a Chief Constable in the UK, but holding a rank that Chicago calls Superintendent (which caused some confusion) has made it a personal mission to get involved in the recruitment exercise, going as far as calling individual applicants, wishing them luck and making sure they were going to stay engaged in the process, rather than dropping out. A lack of a human touch is a frequent criticism of police recruitment, with applicants feeling like they are ‘just a number’  – so this approach is definitely something to think about when I am back in London.

It’s worth also mentioning that the Chicago Police Department has had a very difficult week. A black band (known as a Mourning Band) was being worn across the metal badge that each officer wears on their uniform. This is in memory of Officer Samuel Jimenez who was shot and killed in the line of duty, whilst running to the aid of woman who was being attacked in a Chicago Hospital. He had been an officer for only 18 months. He was responding to a domestic abuse incident. No doubt this will have made for a very difficult week for everyone in the department.

Thursday was conference day, Police Innovation and Reform: Making the Vision a Reality. Held in a very swish room at the Hilton, there were probably about 120 or so people in attendance. Speakers came from the four police forces and a selection of education and not-for-profit organisations around the US. Three panels were held, covering the following themes:

Panel 2: Building for the future: hiring, training and officer support

Lots of really interesting speakers throughout the day and an opportunity to swap business cards and arrange follow up meetings with a number of folks from around the US. I particularly enjoyed speaking to a couple of gents who are doing some very clever research and analytics work, using social media to gauge public trust in specific geographical areas. They work in NYC, so I hope to meet them in the next few weeks and look at how we can perhaps bring a more rigorous and scientific approach to this kind of stuff in London.

I really enjoyed having the opportunity to present my research relating to direct entry into senior leadership roles and a number of delegates have asked to find out more about it. I will be following up with them later this week. 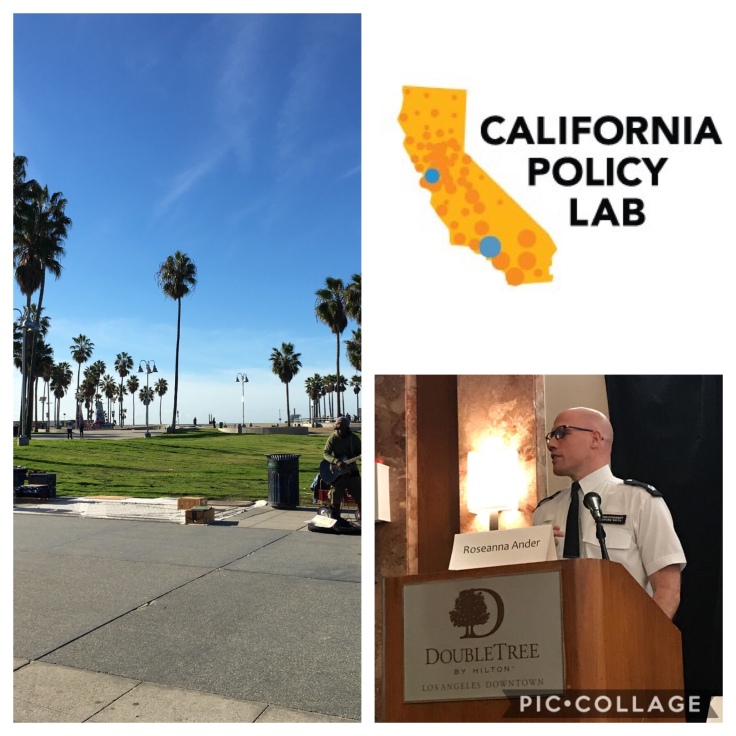 The day finished up with a drinks reception and then a wander down to a food hall, similar to those you might find in SE Asia. It made a nice change to eat in that kind of environment with lots of chatter and atmosphere. The expense of NYC has made eating out hard to justify, so this was very welcome.

After a very long day on Friday and a realisation that I had not seen the ocean, any sunshine or any of California I made a commitment to get up early on Saturday morning before our lunchtime flight back to the Big Apple. We jumped in an Uber down to Venice Beach and had a great breakfast, overlooking the sea, in the sunshine – it was a perfect Californian postcard scene and very nice to soak up some rays. It’ll be back to hat, coat and gloves tomorrow, so this had to be relished before the east coast winter kicks in properly in the next few weeks. 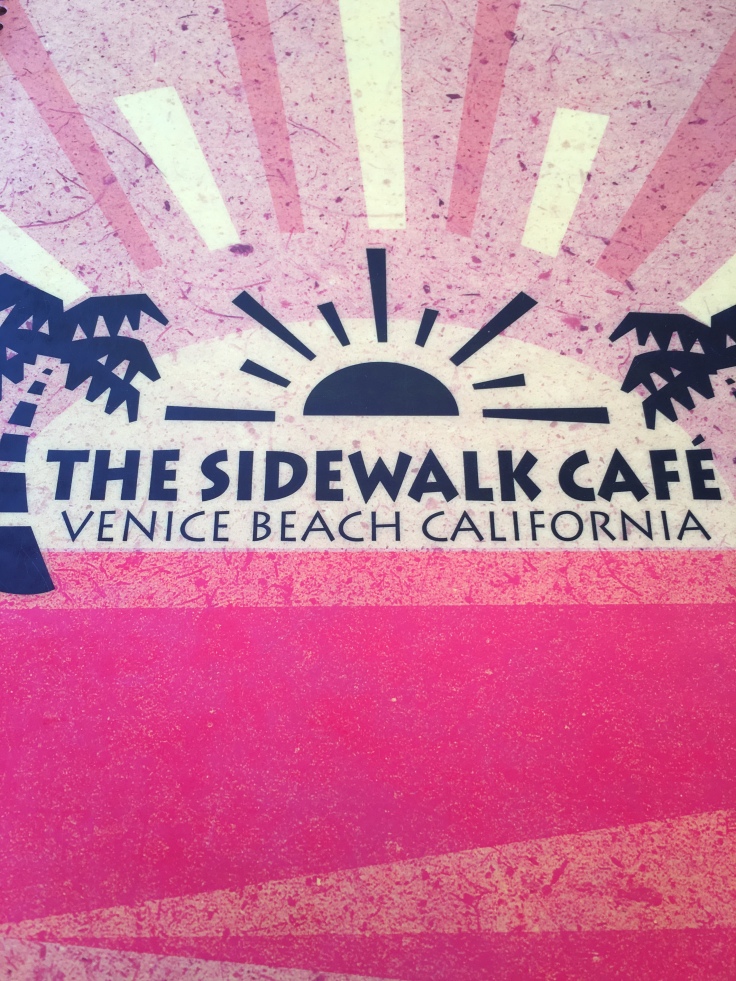 I’ll be back into Uni on Monday morning, with lots of writing to do over the next two weeks. Friday 14th December is deadline day for my first MBA assignment and I’m not completely sure what the title is yet, let alone got any words committed to paper. There might be a few late nights to get this one done. Even by my usual last minute standards, this is looking like a bit of a worry.