A feeling of progress in terms of doing some writing this week. At last I was able to lock myself away on Monday for a full day tapping away on the keyboard. First article now sent off to be critiqued/reviewed (maybe even thrown in the bin) – but hopefully it will be looked upon favourably. I don’t expect to find out for a good 6 to 8 weeks, so it’s just fingers crossed time now.

I mentioned last week I was going to be delivering another couple of lectures this week. The first was on Tuesday, invited by Professor Zelma Henriques to speak to her undergraduate class. They have been studying gender and race from a criminal justice perspective, so I shared some experiences from London and we got a good discussion going about the aspirations of the female members of the class and how they might set themselves up for leadership careers in the future. With the ‘100 years of women in policing’ celebrations taking in place in London this week, I was able to provide a very real example of how influential women now are in the most prestigious law enforcement agency in the world. I think the class were surprised and enthused to hear the Met is led by a woman. Zelma’s daughter, Lisa, also came along to the class. She is deaf but can lip read brilliantly. She has four children, one of whom is a superstar American Football player – she took great pride in showing me some pictures and some interviews he’s done for local TV. He’s massive! Lisa also took some pictures of me and my new chums: 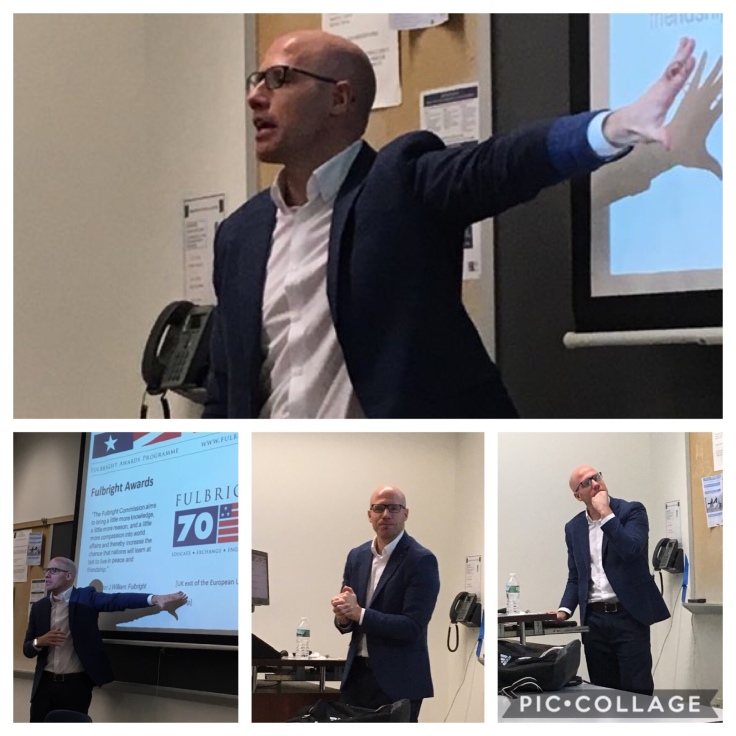 I met another member of the John Jay College team this week – Professor John Walsh, a retired NYPD cop, who is now plying his trade teaching the next generation of NYPD officers and others who are looking at careers in CJ. John is a great character, plenty of old war stories from how policing used to be in NYC. Things are clearly very different now! John invited me to meet one of his undergraduate classes that evening. A quick hello turned into another 40 min lecture. Use of force came up (again) and some further conversations around the wider issues of police legitimacy and trust. I’m really enjoying these lectures. All the students are really interested, engaged and not afraid to ask some direct questions. The marks awarded for classes here are not just dependant upon written work or class presentations. Marks are also awarded for attendance and the level of engagement shown in class. This really drives positive behaviours during the lectures and sees students actively wanting to get involved. One of the folks in the class, a veteran who has seen active service in Afghanistan has invited me to go to the range to do some shooting. Wish me luck!

There’s been much talk in the press this week about the rise in hate crime in the city, particularly anti-Semitic attacks. Some worryingly violent, spontaneous attacks have been taking place across the city. I’ve been surprised by this. Although there is some very clear geographic segregation here, I hadn’t expected to see frequent acts of hate in such a diverse melting pot as NYC. The video below gives an idea of what has been going on. I’m back at NYPD headquarters next week, so will be asking some questions about this to get a sense of how the police department is set up to respond to this.

There was an ‘officer involved shooting’ on Wednesday evening (the term used to describe the discharge of a firearm by a cop). It was notable how quickly the NYPD arranged a press conference and wanted to get out some messaging in relation to the context of what had gone on. Frightening to hear that a woman and a 12 year old girl were both caught in the cross fire. In total, cops discharged 27 rounds as the race to detain the suspect played out in a public street in the Bronx.  Whilst this city feels much safer than it once did, this is a sobering reminder of the dangers that are still present. I reflected on how the post-incident management to this kind of incident would have played out in the UK. Importantly, independent scrutiny (via the IOPC) would have been a key point that a talking head from, for example, the Met would have highlighted. This didn’t seem to be recognised as a priority at this press conference [see video below].

Whilst all of this was playing out in the northern reaches of NYC, I was enjoying some food and drinks with my new friends from the University. We found a great little bar that had two amazing musicians doing their thing on two grand pianos, taking requests all evening with no sheet music in front of them. Incredible! The night was cut short when a rather official looking individual placed a large notice on the door of the hostelry stating that it was now closed due to “breaches of mental hygiene”. I had no idea what this meant. Considering I was out with three extremely wise professors, I thought I would quickly be able to secure an answer to what a ‘breach of mental hygiene” was. No such luck. Some of the greatest minds in NYC, and they didn’t have a clue what this meant, sharing my misgivings that it probably didn’t really mean much at all! I’ve noticed lots of public notices like this around the city, giving instructions or making statements of one type or another that don’t really seem to make a lot of sense and involve words in the wrong order or just completely out of context. My pursuit of fluency in American English is still a work in progress – it may take some time!

After work on Thursday evening we went to the famous Radio City to see the dance group the ‘Rockettes’ in their ‘Christmas Spectacular’. For those of you not in the know, this is a dance troupe modelled on the style of the Tiller Girls from the 1890s. A great evening of sharp dance choreography, Christmas music and a super light show – all very cleverly done in an incredibly impressive venue. This is as much a part of a New York Christmas as ice skating in Central Park, so it was one of those ‘must do’ things. Cheesy beyond belief – but great fun. 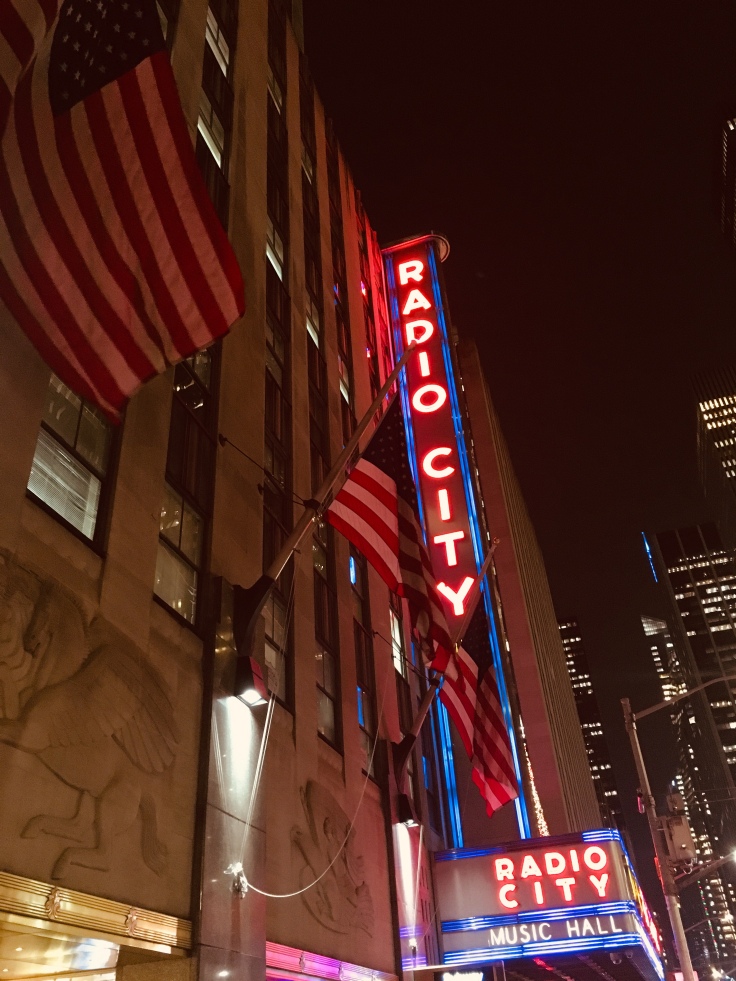 One of the final big crime related news stories of the week was the theft of a car in Brooklyn. Parents had stopped outside a shop and run inside, leaving their three kids on the back seat. The thief jumped into the drivers seat and set off with the kids! A short time later the vehicle was found abandoned, with the children safe and well. The interesting dynamic here was the way in which the NYPD delivered the press conference. It was led by a senior cop (the one in the suit  in the video below). Two things of note:

(i) the senior cop went to great lengths to share the tactics of what was done to locate the car. It felt like this wasn’t really the story here – surely it was more about the kids, the suspect, the negligence of the parents – but the narrative pursued by the cop was all about what the NYPD had done to investigate and locate the car. I’m not sure if this is reflective of the expectations of the media here; that this much information is expected and so the officer simply got ahead of the questions, or if this is some kind of purposeful PR type exercise to build further confidence in what it is the police do in incidents such as this. Either way, it certainly felt different to how we would do this kind of thing in the UK. The speed with which the NYPD wanted to do this (similar to the shooting mentioned above) certainly makes them seem very transparent. Definitely something we might be able to learn from at home.

(ii) the participation of the actual officers involved was also interesting to see. The male officer made a personal reference to “being a parent”, which made that part of the press conference feel very human. Again, lessons to be considered for how this might be done at home.

Have a watch of the video…see what you think.

Final interesting (at least to me, sorry if you’re losing the will to live) thing from this week is another course I have discovered, offered at John Jay College. It’s all about providing IT skills for people who have been in prison, particularly on very long sentences. The prison related statistics in the US are eye-watering:

Considering that just about all the evidence you read says that prison doesn’t work and causes more harm than good, these numbers have left me pondering! Anyhow, the point I was making was that if someone has been locked up for 20 or 30 years the digital age has passed them by. So applying for a job online, managing email or typing up a CV is an impossible task. This course (see link below) helps them navigate this stuff.

That’s it for this week! Thanks for reading.