I’m writing this blog in a rather tired state after a very long walk today. We set off for an amble in the sunshine towards Brooklyn and arrived back at the apartment about 8 hours later having covered just over 20 miles. It was a bright, cold winter day – hardly a cloud in the sky. We headed down the Upper East Side, through midtown and over the Manhattan Bridge, then took a walk around a very affluent neighbourhood (circa $5000/month for a studio apartment) called, I kid you not, DUMBO. I found out this week it’s not named after a Disney elephant, it’s an acronym: Down Under the Manhattan Bridge Overpass. Brilliant! It’s a really nice part of town and the view across the East River to Manhattan and down to the Statue of Liberty is seriously impressive. 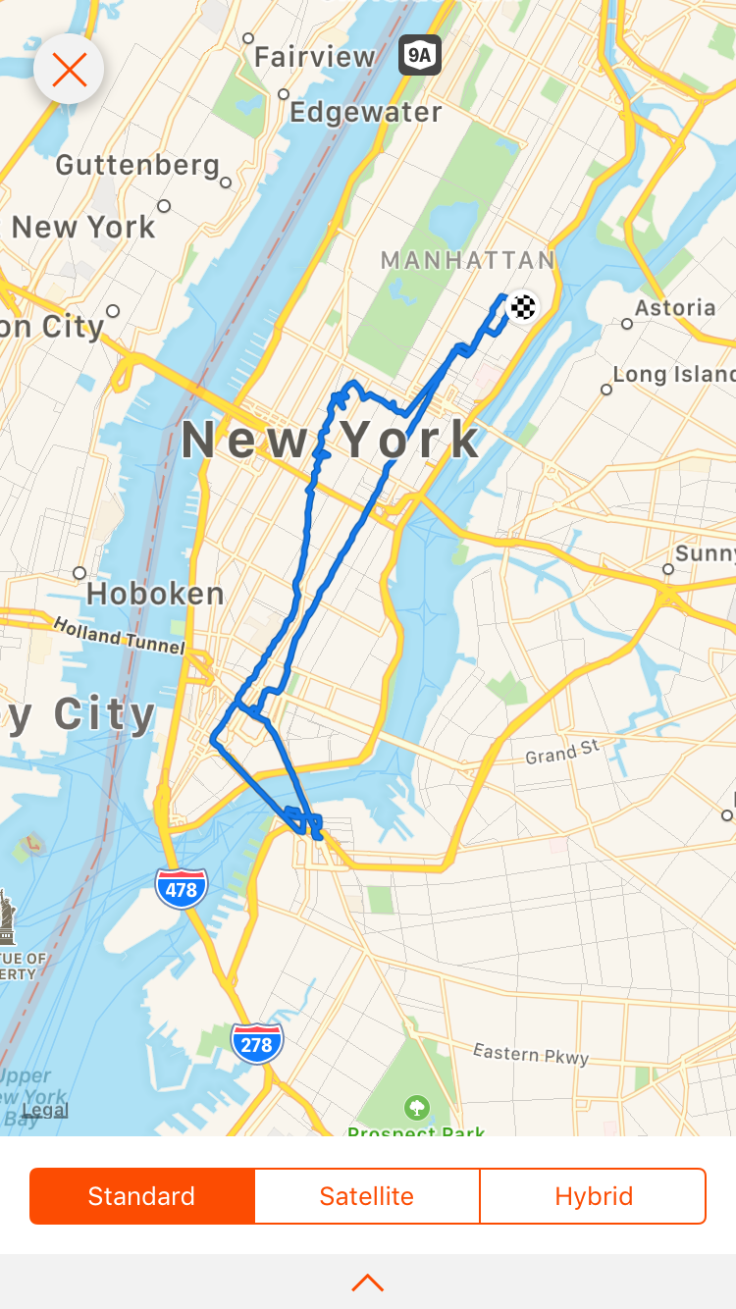 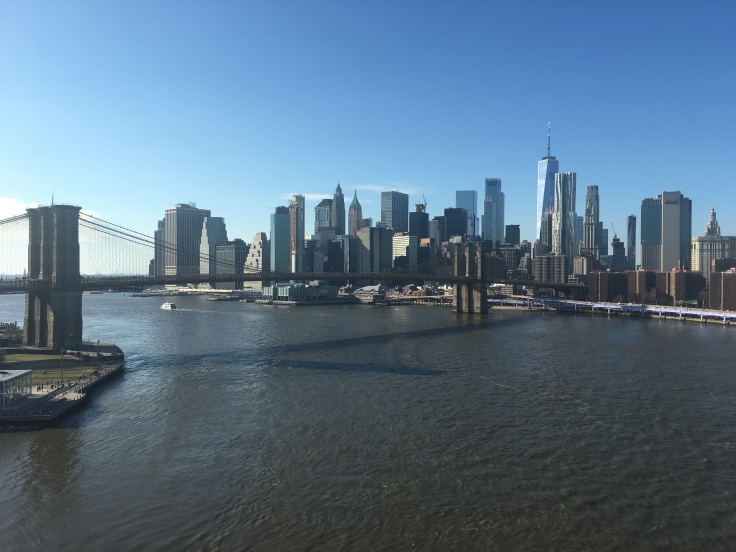 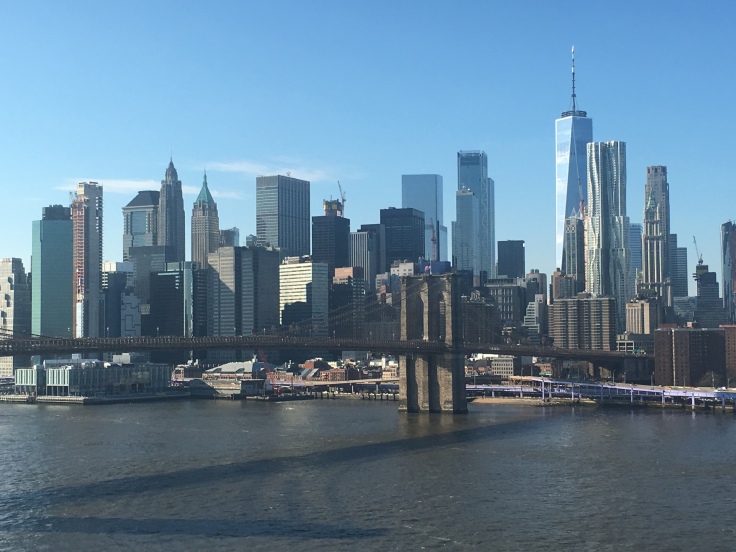 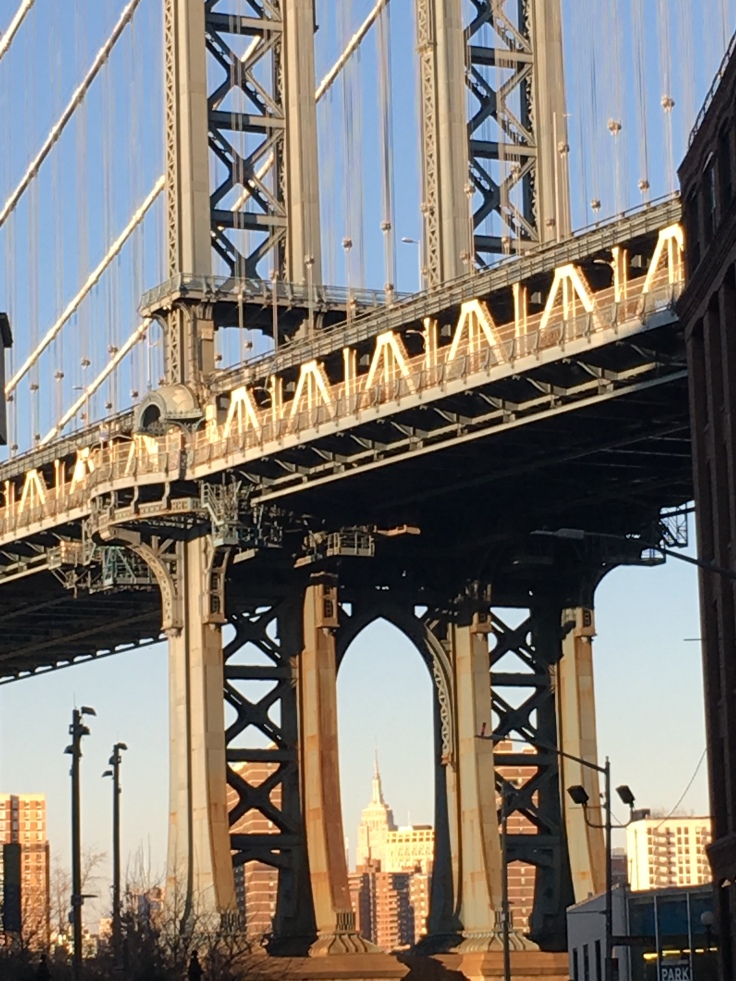 On 5th November, less than a week after my arrival in the US, I wrote a blog entitled ‘Culture Shock (kind of)’ – beyond some surprise at the cost of buying toilet rolls and the occasional difficulties in making my English accent understood by the New Yorkers, I reported that all was well, everyone was welcoming and that this ‘Culture Shock’ thing I had read so much about was no big deal. Over the last ten days or so, I have revisited this. A bit more googling shows that there are potentially four stages to the phenomenon of Culture Shock:

I met a friend of a friend for dinner this week – Thomas, a German lawyer who moved to the US in the last year or so. Our meeting could not have come at a better time. All the frustrations that I was sharing, Thomas had also experienced over the course of the last year. We had a good laugh about how our shared ‘euro-centric’ view of the world meant that much the same stuff was causing us similar disquiet. It really helped me to put my grumblings into perspective. Thomas, being the wise chap that he is, prompted me to do a bit more reading into the whole culture shock thing, and it started to makemore sense. I was beginning to feel rather ungrateful. Here I am, in NYC, at Christmas, away from work, doing loads of interesting stuff – and yet I was getting grumpy about things that shouldn’t really matter. Whilst I can’t say I’m yet moving into the ‘Acceptance Stage’ at least I now understand why my feelings were changing and that this is normal. Very reassuring.

Whilst Christmas isn’t exactly my favourite time of year, I would expect to have started feeling a bit more Christmassy by now. All the familiar Christmas music is playing in the shops and decorations are everywhere, but I haven’t really got into the swing of it yet. I think this is probably because so many of the normal triggers are missing, being away from home and work. I think the work Christmas party, the presence of cakes on every other desk in the office, the work Christmas jumper day, drinks with friends and eating lots with family are the big triggers for knowing that Christmas is coming. With all those things not happening, it feels like I’m a bit more of an observer rather than taking part. That’s fine with me – but an interesting observation nonetheless. It is clear that NYC does Christmas bigger and better than most places I have seen, but that doesn’t necessarily make you feel part of the party.

We went to a Carol concert on Saturday evening, at St Paul’s Chapel in Downtown Manhattan. When it was built, in 1766, it was the tallest building in NYC. It is now dwarfed by everything around it but remains the oldest building in use in New York. It is an extremely impressive place; it survived the great fire of 1776 and the 9/11 attacks (just a couple of blocks away) and now stands in the shadow of the Freedom Tower. It was a great evening, with singing from the ‘Downtown Voices’ choir and the Trinity Youth Chorus, with music from the NOVUS NY orchestra. All the festive classics were being belted out. I mimed for most of it. 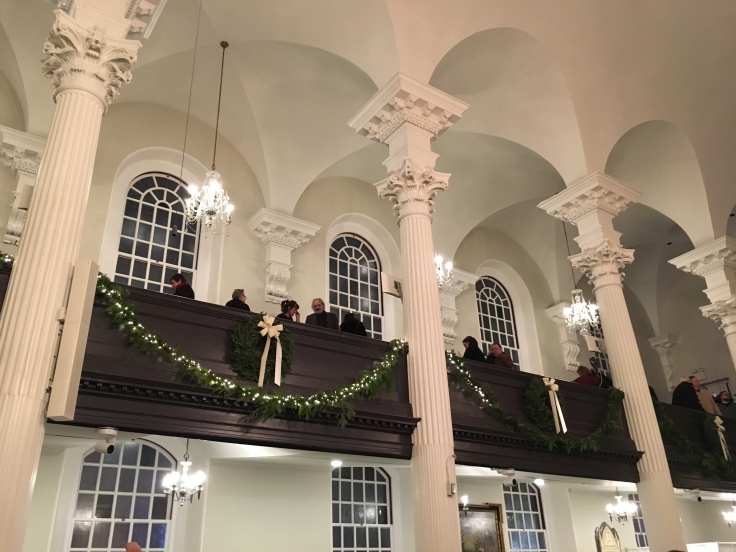 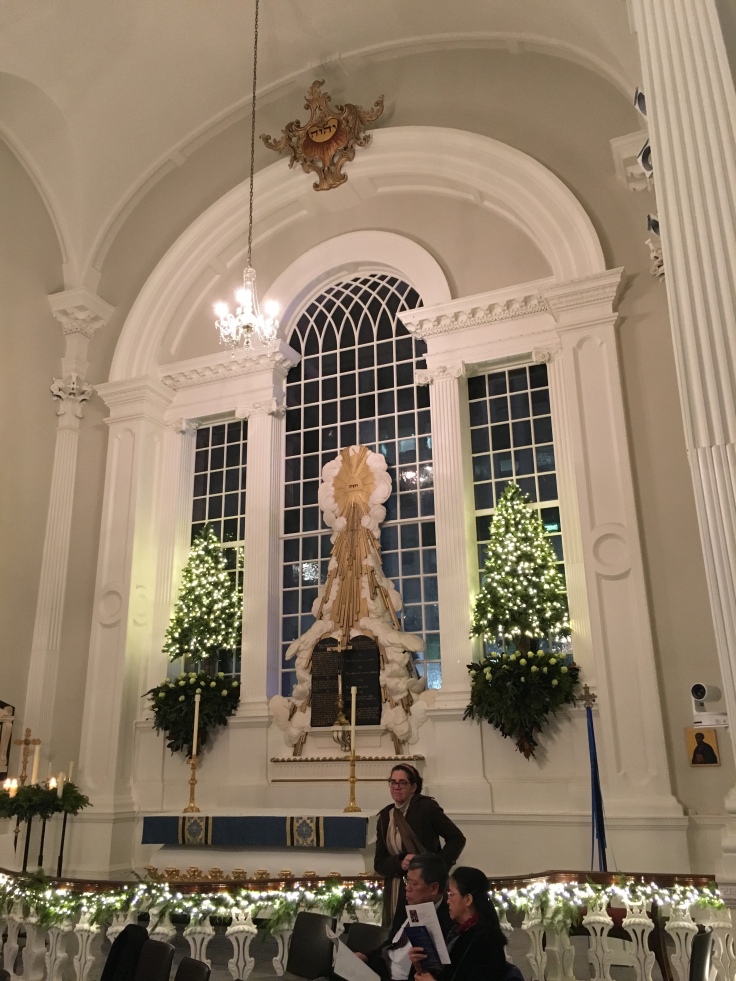 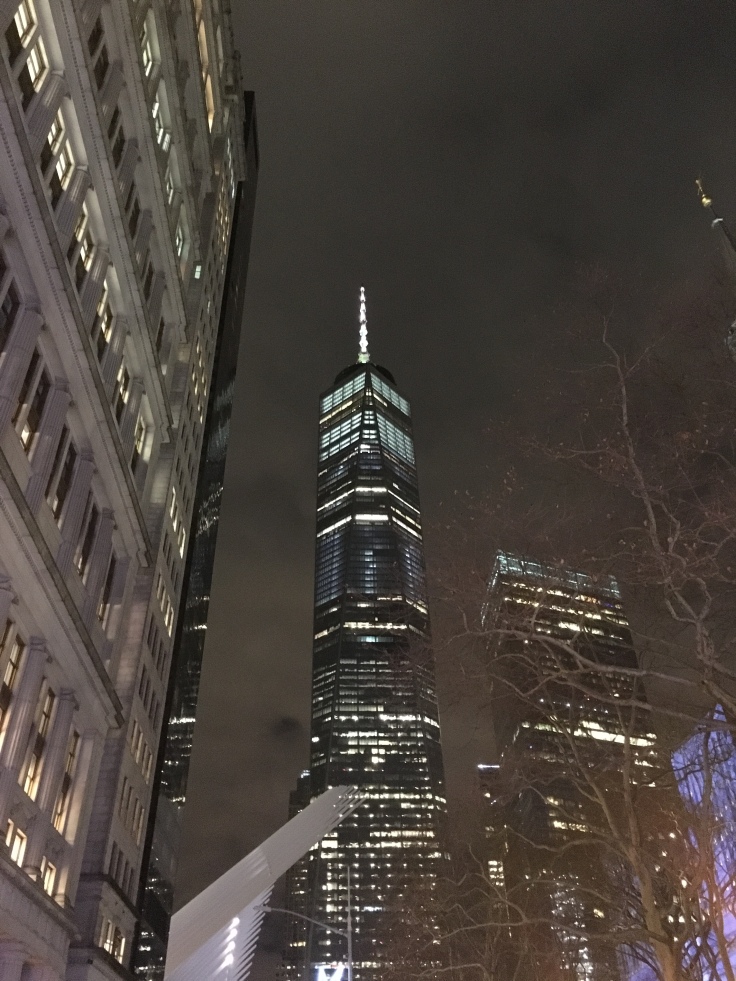 As per usual when walking around NYC, when we left the concert last night, there were a number of homeless people on the subway. I mentioned a couple of weeks ago about the scale of the homeless population in Los Angeles (4m people, 30k homeless). I’ve done some research this week into the scale of the NYC problem:

One of my colleagues at the University explained that many of these homeless children are in full time education. He will often pick up his kids from school and as they head back to a warm house, to eat their dinner and play with their toys, they say goodbye to their homeless friends who go back to the shelters in which they currently live, or worse, to the streets. In a city of such wealth, it is unfathomable that this situation can be allowed to persist. To provide some comparative context; NYC and London have similar populations (circa 8.5m) but the London homeless population (according to The Big Issue) is in the region of 12k – which is at the top end of the estimations, because it includes those in shelters and those that are ‘sofa surfing’ etc and don’t have anywhere to permanently call home. The on-street homeless population is quoted as being somewhere between 3,00 and 6,000. So in broad terms, depending on the numbers used, NYC has anywhere between 6 and 10 times the homeless population of London. My sense is that, as in the UK, much of the homeless problem is linked in some way to drug abuse and the prevalence of mental health conditions – but it is widely reported here that the cost of living is also a key contributor. 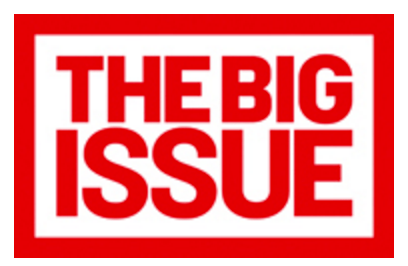 I mentioned a couple of weeks ago that an officer from the Chicago Police Department had been shot and killed whilst dealing with a domestic violence incident at a local hospital. There was more bad news this week when a further two Chicago officers were killed in the line of duty. Eduardo Marmolejo and Conrad Gary were responding to a report of shots being fired and, in the course of pursuing the suspect, were hit by a train. They were both killed instantly. Having lost three officers in the last month, it must be a very difficult time in the Chicago Police Department. The video below is their Chief, Eddie Johnson, talking to the media after the incident. I had dinner with Eddie and his senior team in LA a couple of weeks ago. They put great value on supporting and looking after their staff, so I know they will have found the last few weeks to be very difficult.

I’ve taken on a new and very interesting piece of work this week. I met a great contact a few weeks ago who is currently doing some work with one of the Police Departments in California. Coming from a consultancy background, she is well placed to try and find a solution to a rather problematic staffing issue: 25% of the Department’s 800 strong workforce are eligible for retirement in the next 12 months. Options are now being explored to manage this problem and I have agreed to work with her to look at some potential solutions. As mentioned on my blog previously, there are something like 18,000 police agencies in the US, so it is an extremely competitive market place, in terms of both recruitment and retention of officers of the right calibre. The problems being experienced in this case are not unique, this article presents some really interesting findings from another department, Berkeley, that is experiencing similar problems:

Another interesting meeting (and lovely lunch) this week was with two gents who are behind one of the US’s key technology influencers: ELUCD. To quote their own website:

“Elucd helps leaders improve trust and safety through data. For the first time, city leaders can track the real-time pulse of how every neighborhood feels about trust and safety, and develop strategies for their improvement. Elucd measures how your residents feel about vital questions essential to running a city ー like whether they feel safe in their neighborhoods and how much they trust their local police”

Building upon technology that was used to drive Obama’s 2008 election campaign, Elucd are all about putting timely data in the hands of police leaders to understand the mood of local communities. The firm are growing at pace across the US. I would love to get this kind of approach into London too. We are speaking again next week so I can get a further demo of how their solution works. This article from the New York Times explains a bit more.

That’s about it for this week. It seems Christmas week is a little different on this side of the pond, the Uni is closed on the 24th and the 25th, so I am going to take my two ‘bank holidays’ on Monday and Tuesday, then get back to it on Wednesday. I hadn’t realised that Boxing Day wasn’t a thing over here. On our rather limited budget, the plan is for a walk around Central Park on Christmas morning, followed by burgers for lunch and Mary Poppins at the Cinema in the evening. No port. No cheese. No turkey. It’s going to be rather a different Christmas! Whatever you’re doing – enjoy. 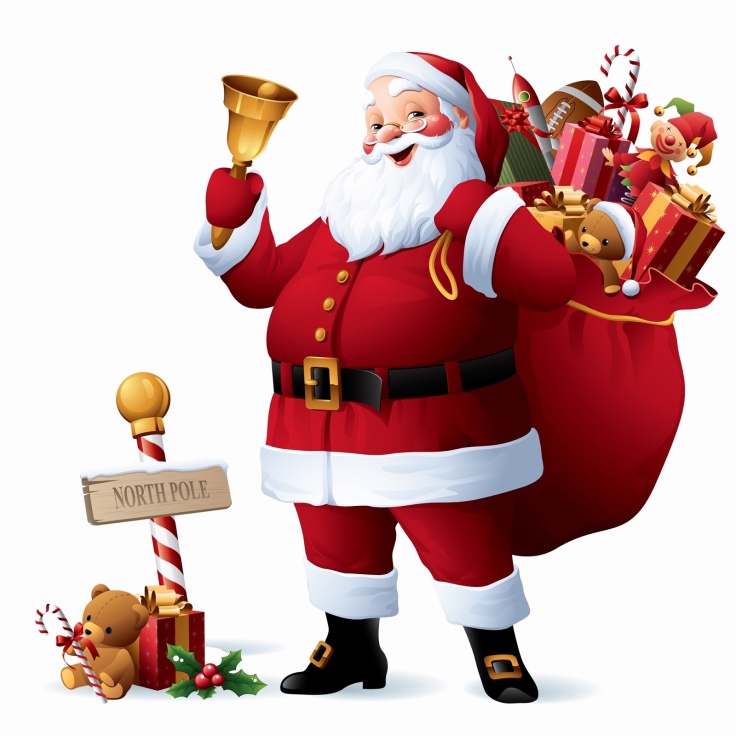