It was the countdown to NYE at the time of my last update and the already chaotic NYC was even busier than normal. New Year is one of the peak tourist weeks in the City – and it felt that way.

NYE itself was a bit of washout. All the talk in the days leading up to it was about rain, rain and more rain. That was exactly what happened. Whilst some colleagues at the NYPD kindly offered to give us access to a decent vantage point for the Times Square celebrations, the thought of standing in the rain without an umbrella (none permitted for security reasons) didn’t fill me with joy. So we headed to Little Italy for some food, having been impressed with how nice it looked when walking past all the restaurants in the sunshine a couple of weeks before. The rain had killed the atmosphere, so we opted for a feed at the Olive Tree in Greenwich Village instead, our third visit since we’ve been here. The food and the live music was fantastic, as always.

Having admitted defeat against the rain and missed out on the ball drop in Times Square, we had to rely on the TV footage in the restaurant. It looked pretty good (despite the weather) but I have to say that Sydney, Singapore and Hong Kong looked better and still, in my view, get the prize for putting on the most spectacular NYE celebrations. But what would I know! Christina Aguilera and New Kids on the Block (NKOTB to those of a certain age) were performing live in Times Square, so if that’s your thing, and standing in the rain for up to 14 hours waiting, then NYC was the place to be.

The first week of the new year was a busy one on the political scene. NY State’s Governor Cuomo was sworn in for his third term in office and Letitia James became the first African American to hold the office of State Attorney General. A new minimum wage also came into effect in the City – rising from $13 to $15 per hour.

With the depths of winter fast approaching, a very busy couple of months under the belt and a small window between the end of one Air B&B contract and the start of the next one, we took the opportunity to head south for a break and some sunshine. A short cruise around the Caribbean was on offer so we snapped up the bargain. 6 islands over 6 days – with temperatures frequently in the 30s. Just what you need this time of year. From Puerto Rico, we headed further south to St Maarten, Antigua, St Lucia, Barbados and then back up north to St Kitts. As much food and booze as you could possibly want on the ship that was more like a floating 4 star hotel – it was absolutely huge. 348m long, 16 floors, passenger capacity of over 4000, with 760 crew catering for every whim.  Having never been on a cruise before, it was a really great experience. Waking up each morning in a different port, with some of the best beaches I have ever seen was fantastic – even more so when New York and London are shivering! The passenger profile was a sight to behold: let’s just say the average BMI was off the scale and the queue for the salad bar was never very long. It was a great few days and has recharged the batteries, ready to take on the rest of the winter. 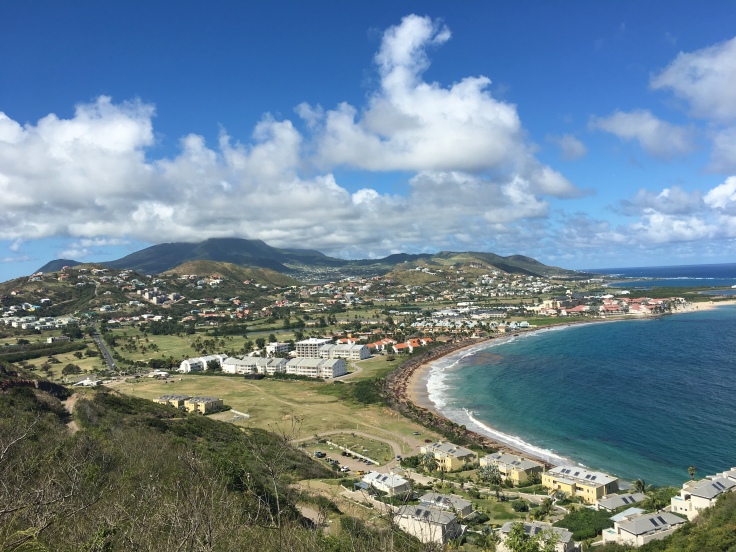 So now we’re back in the Big Apple and the next stage of the adventure starts. Having said goodbye to our (very) small apartment on the Upper East Side we have now moved into an (even smaller) apartment in Harlem. The previous place was on 83rd street, a few blocks east of Central Park. The new abode is 36 blocks to the north, on 119th street. It is a renovated brownstone that is absolutely stunning. Not much exploring of the area yet, but to put it in a London context, it feels a bit like we’ve moved from Richmond to Tooting. I’ll leave you to judge whether that is a good or a bad move. Harlem is described as gentrified – I’d say it is still gentrifying (a work in progress). We have been made to feel very welcome by the host, who lives in an apartment in the same building and rents out the other three units as well. He owns a restaurant just a few blocks north called ‘Harlem Shake’ – https://www.harlemshakenyc.com – it’s a regular award winner in ‘best burger’ type competitions. Definitely somewhere that will need a visit at some point (once the excess lard from the cruise has been gotten rid of). All the talk in NYC this weekend is of a huge snow storm coming our way. It’s meant to reach us tomorrow (Sunday) afternoon with temperatures on Monday dropping to about -15 degrees. The weatherman is telling us to stay at home and don’t even think about taking a car out. Sounds like it’s going to be fun!

I’m heading off to Chicago on Wednesday, for a conference jointly hosted by the Chicago Police Department and the University of Chicago Crime Lab. I hope any flight delays have been resolved by then. With prep needed for that presentation and a second article to get finished, just a short blog this time.